The most popular Houston magnet schools were River Oaks Elementary, Pin Oak Middle School, and DeBakey High School for the 2019-2020 academic year.  Families had about a 20%-40% chance of gaining admission to a desirable magnet school for a prime entry year, the year when the most number of seats are available for a given school.

The prime entry year for most HISD schools is kindergarten for elementary, sixth grade for middle, and ninth grade for high school.

A little less than 9% of Houston ISD (HISD) students participated in this year’s annual School Choice Lottery. 18,092 families submitted an average of 2.4 applications each for a total of 44,165 applications submitted during Phase I of the lottery.

Participation in the lottery was down 13% versus the previous year when 20,711 students submitted 52,123 applications. The decline was most prevalent at 6th grade (-13%) and kindergarten (-9%) but virtually unchanged for 9th grade.

This was the first year that General Academic looked at applications from siblings of currently enrolled students as a measure of a family’s satisfaction with a school. The average HISD magnet school could expect to fill about 15% of its seats with siblings, but the most popular schools could expect 25% or more if space allowed. HISD’s lottery rules reserve up to 25% of available seats just for the siblings of students who are currently enrolled and will continue to be enrolled in the following year. 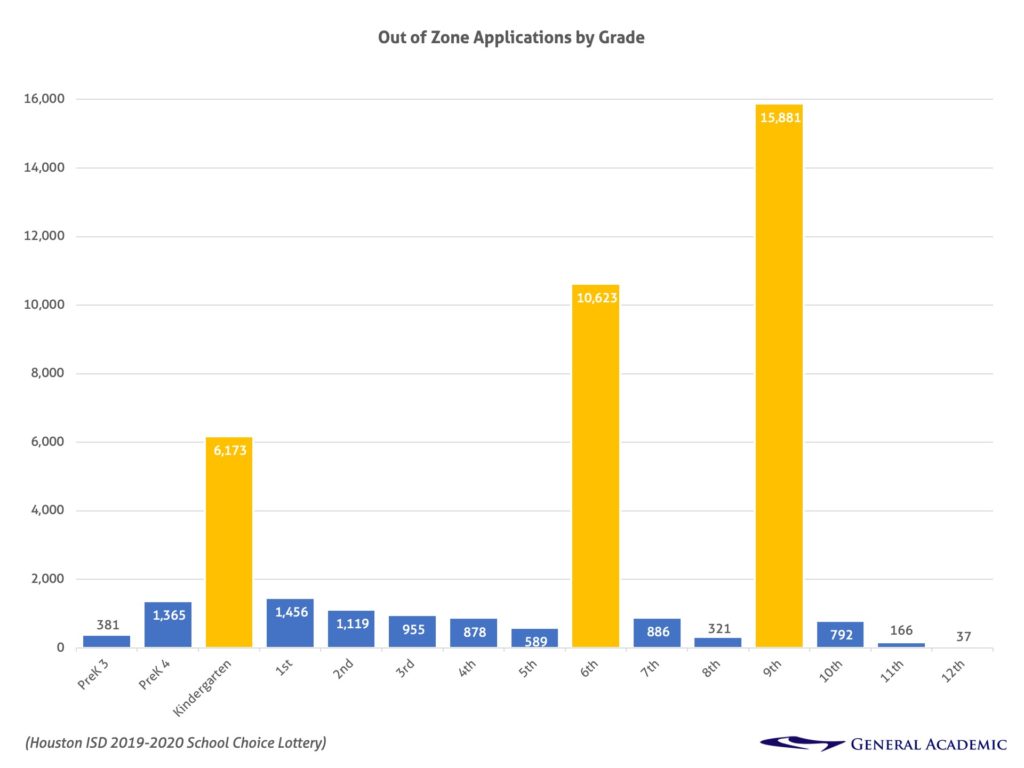 While all students are automatically accepted into the school in their zoned neighborhood, the annual School Choice lottery allows families to apply to schools in other neighborhoods or to special schools that are “equal opportunity” in that none of the students come from the surrounding neighborhood.

​The ability to attend an “out of zone” (OOZ) school is particularly appealing if families live in a neighborhood zoned to a relatively poor performing school but cannot afford to spend  an average of $3.5 million to buy into or rent in the neighborhood zone of number one River Oaks Elementary for example.

However, parents must pay attention to a school’s unique program and admissions requirements. While some magnet schools enforce no requirements other than families be residents within HISD’s attendance zone, many schools have minimum qualifications such as that students be designated as Gifted and Talented (River Oaks Elementary), have a talented tongue for languages (Bellaire High School), or possess surprisingly good artistic ability (High School for the Performing and Visual Arts). About 30% of applications this year were automatically rejected, because students did not actually meet the qualifications to attend a certain school.

For the 2019-2020 lottery, students could have applied to a maximum of five schools, and they had to rank their schools in order of preference. The rank order did not affect the outcome of the lottery; it only affected how students were placed on a waitlist. If a student was admitted into a school they ranked higher than another school, they would not have been waitlisted at their lower-ranked school. The intended effect of this policy is to shorten waiting lists for all schools.

Parents had to have submitted their applications online or by mail by December 7, 2018, to participate in Phase I of the School Choice Lottery. If families applied to a vanguard school but their children were not already identified as Gifted and Talented, they had until December 9, 2018, to request testing. Families received acceptance letters on March 21, 2019, and had through April 4 to accept the offer of admission.

Qualified applicants are thrown into a randomized lottery. There are generally no ways to gain an advantage other than to:

Students may technically apply to most magnet schools up until the first day of school on August 26, 2019. However, applications submitted after Phase I are essentially guaranteed not to place into any desirable school, because all the seats would be already taken. Students will continually move off of the waiting list until August 26, 2019.

This information was originally published at GeneralAcademic.com