Pin Oak, Lanier, and T.H. Rogers middle schools retained their titles as the most popular choices. Qualified families had about a 40% chance of getting into a top middle school. For the 2019-2020 academic year, 4,361 students submitted 11,431 applications for 6th grade to 34 HISD magnet middle schools.

(Image Caption – With 1,735 applications for 140 seats, Pin Oak Middle School remains one of the most popular and difficult to get into HISD middle schools. Photo via Wikipedia-Henry Han).

While an overall of 3,915 sixth grade seats were available, the 9 most popular middle schools received 69% of the applications and had 1,473 seats available for an average acceptance rate of 40%. Students seem eager to attend these schools as 78% of families quickly accepted their offer of admission.

These popular middle schools are objectively good when measured by their STAAR test results. On average, 40% of students at these schools are scoring at the highest, “Masters” level on the STAAR reading tests, and 27% are earning the Masters designation on the STAAR math tests, which is up to twice as good as the Houston ISD average of 21%.

Families at these middle schools seem happy. These top 9 schools have high “loyalty rates” as measured by the percentage of applicants coming from families who already send a student to the school. On average 19% of the seats could potentially be filled with only siblings at the top schools, compared with less than 7% for the less popular schools. Pin Oak Middle School stands alone with the ability to fill as many as 42% of its available seats with siblings (although only 25% are automatically reserved according to HISD’s magnet lottery rules).

Houston ISD’s middle schools are more diverse than its elementary schools, which are mostly populated by zoned neighborhood students. Since no neighborhood students are technically zoned to them, Pin Oak and T.H. Rogers in particular are “equal opportunity” as nearly every single seat is available to a student participating in the lottery. These perennial favorites have the added benefit of being located in rich neighborhoods. Baylor College of Medicine at Ryan Middle School was formerly an all-lottery school as well; however, it began accepting neighborhood students in 2018. 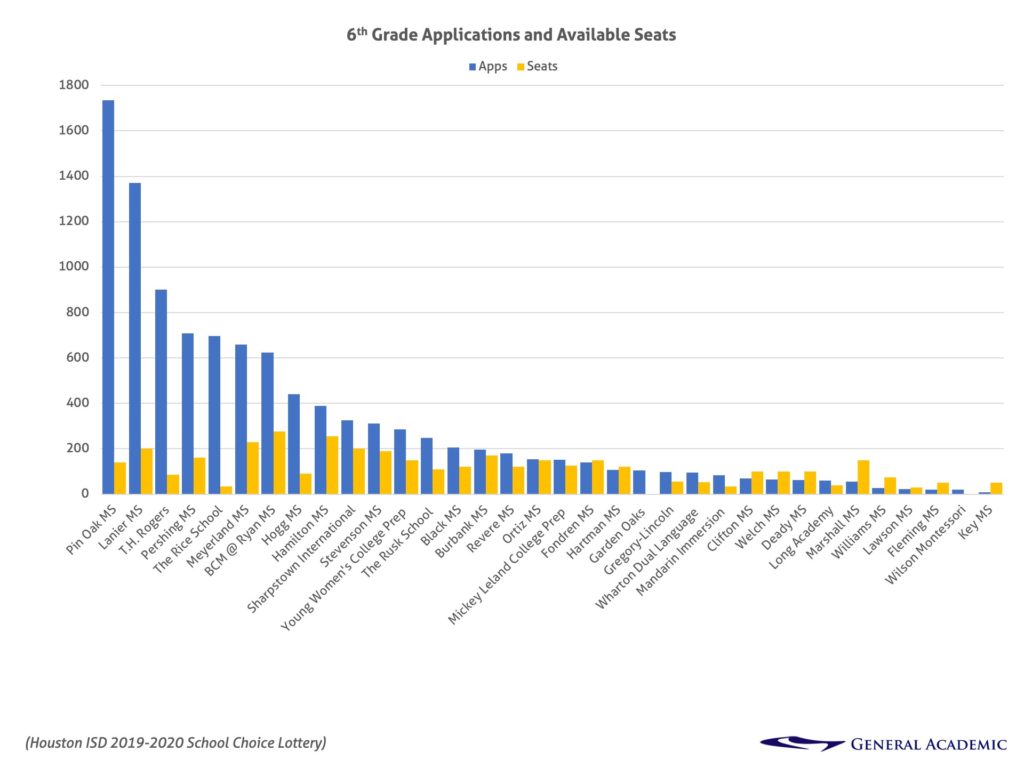