DeBakey assumed the top spot for the first time followed by Carnegie Vanguard and Bellaire High School. Qualified families had about a 34% chance of getting into a top high school. For the 2019-2020 academic year, 5,946 students submitted 16,659 applications for 9th grade to 39 HISD magnet high schools.

(Image Caption – With 1,606 applications for 300 seats, Michael E. DeBakey High School for Health Professions is one of Houston ISD’s most popular and difficult to get into high schools).​

While an overall of 5,752 ninth grade seats were available, the 13 most popular high schools received 72% of the applications and had 2,649 seats available for an average acceptance rate of 34% or nearly 3 applications per seat. Students seem happy to attend these schools as 72% of families quickly accepted their offer of admission.

However, high academic results do not always appear to be the best predictor of a high school’s popularity. In particular, Heights High School, High School for Law and Justice, and Waltrip High School stand out for their comparatively low STAAR scores. 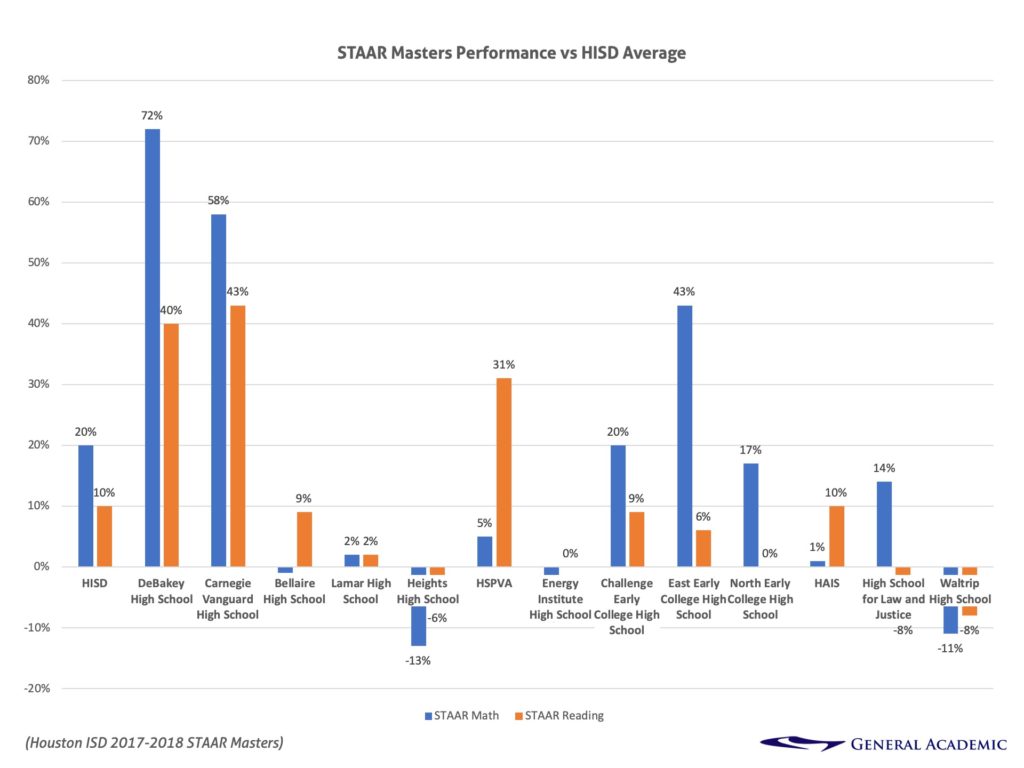 Compared to elementary and middle schools, top HISD magnet high schools seemingly put a stronger emphasis on math; the percentage of students earning the highest STAAR “Masters” scores are nearly double that of Reading. The best high schools by math STAAR scores are DeBakey (92%), Carnegie Vanguard (78%), and East Early College High School (63%). The one exception to this trend is HSPVA, where reading scores (41%) exceeded math scores (25%).

Similarly, families are less loyal to magnet high schools; the higher differentiation between academic programs probably plays the biggest factor. On average only about 15% of seats are filled by siblings, which is double the 8% average of all magnet high schools but mostly equal to the average across all HISD schools at prime entry grade. In this regard, Bellaire and Heights High Schools stand out with their 25% of applicants coming from the siblings of currently and continuing enrolled students.

Lamar High School fell three spots and received 23% fewer applications versus the 2018-2019 lottery. However, its 2018 end of course (EOC) STAAR results were up across the board; it saw its biggest gain in Algebra I, where 24% of students earned the “Masters” designation versus 18% in the previous year. Similarly, Advanced Placement (AP), International Baccalaureate (IB) rates, and SAT scores are up. 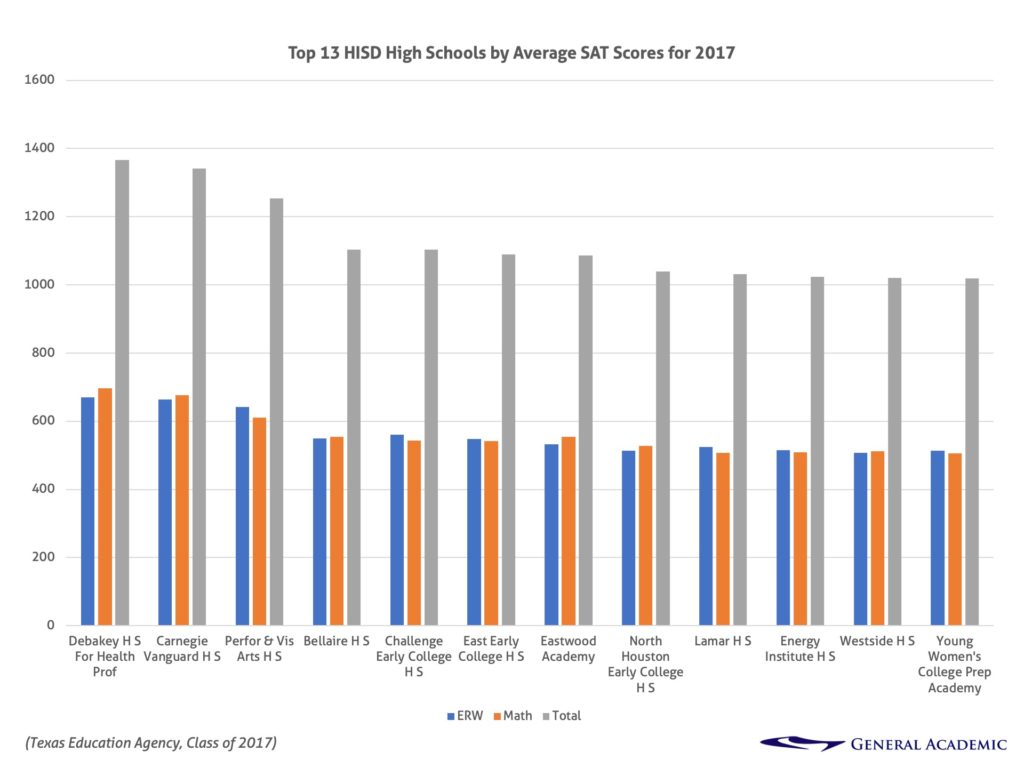 The River Oaks-area school’s new $129 million expansion is on track to open in time for the 2019-2020 school year. The former Dean of Magnet Students at popular Pin Oak Middle School became Principal in 2018. Therefore, the most plausible explanation for the decline in popularity was the daytime murder of a student on November 24, 2018, just outside of Lamar’s campus. Houston police arrested a gang member on March 8, 2019, for that student’s murder.

When measured by SAT scores, Houston’s top high schools are DeBakey, Carnegie, and HSPVA; the very high average scores at these elite schools place their students in the top 10% nationally.

Carnegie Vanguard and DeBakey are both nationally ranked by US News and World Report. Carnegie ranks #24 (down from #8 last year), and DeBakey ranks #17 (up 1). Additionally, Eastwood Academy is ranked #97, but it does not participate in the School Choice Lottery; interested candidates must submit their application for holistic review to the school in person. 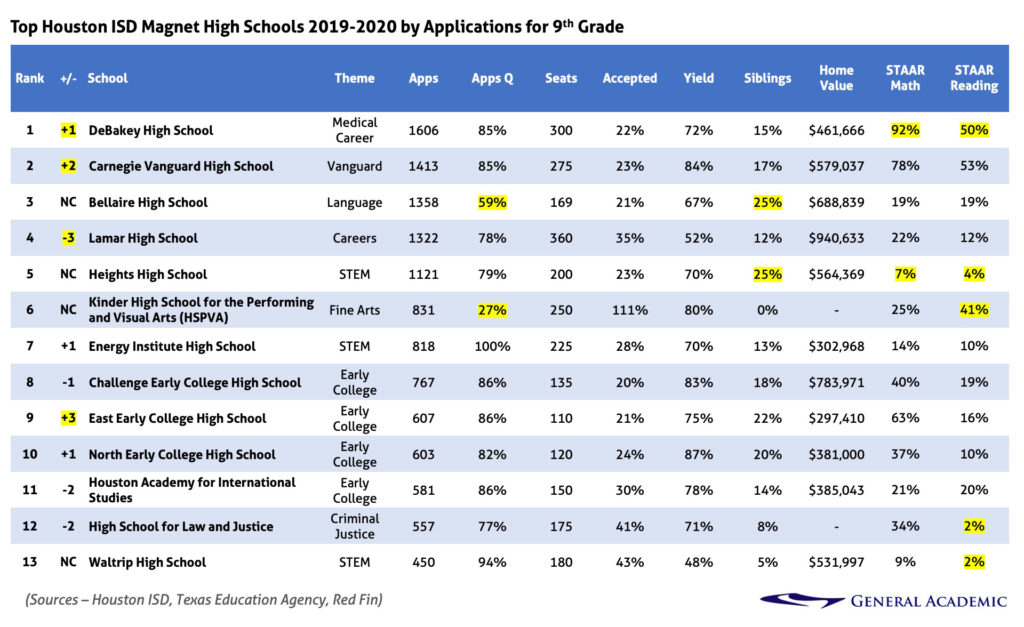 As to be expected for the diversity represented by the US’s 7th largest school district, many of Houston ISD’s top magnet high schools are increasingly differentiated, and a school’s recruiting efforts tend to target specific communities. For example, during the 2017-2018 school year, HSPVA’s student population was 44% white (400% more than the HISD average), and only 19% economically disadvantaged (75% less). Conversely, East Early College High School was 94% Hispanic (52% more vs HISD) and 84% economically disadvantaged (12% more vs HISD). 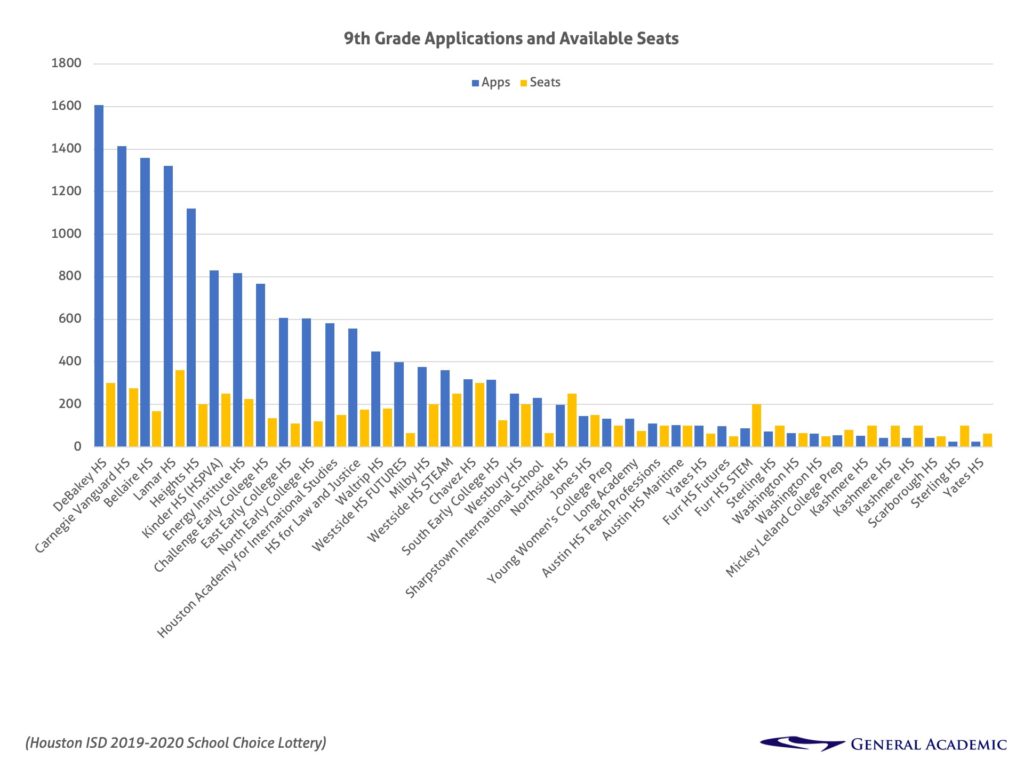 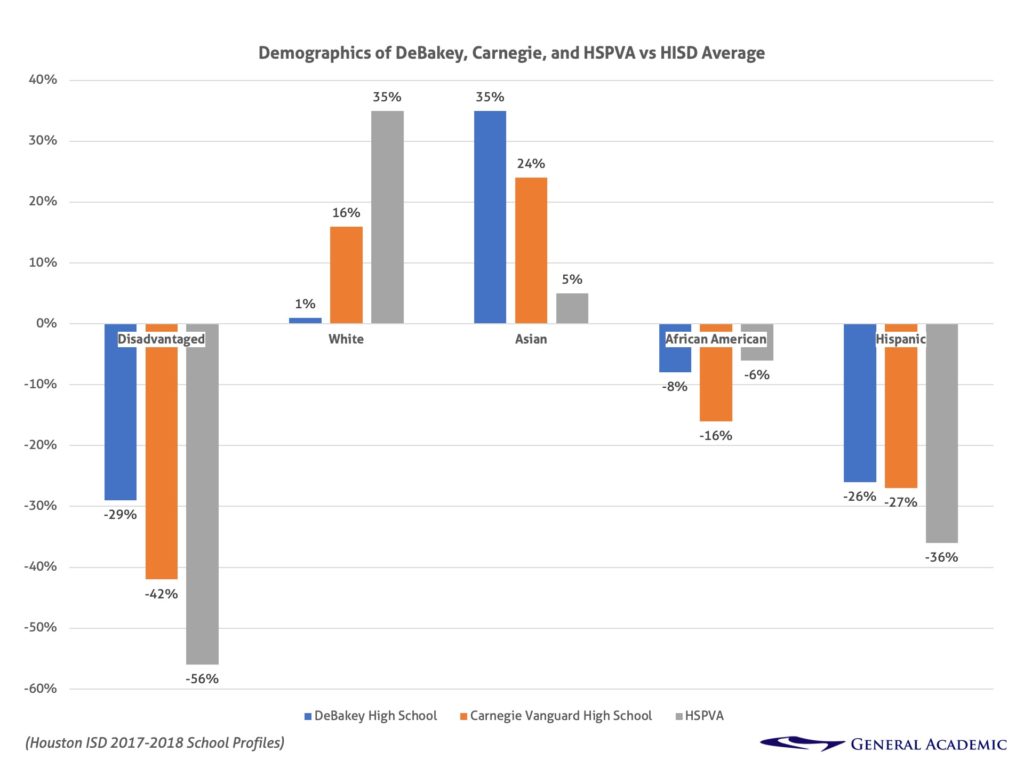